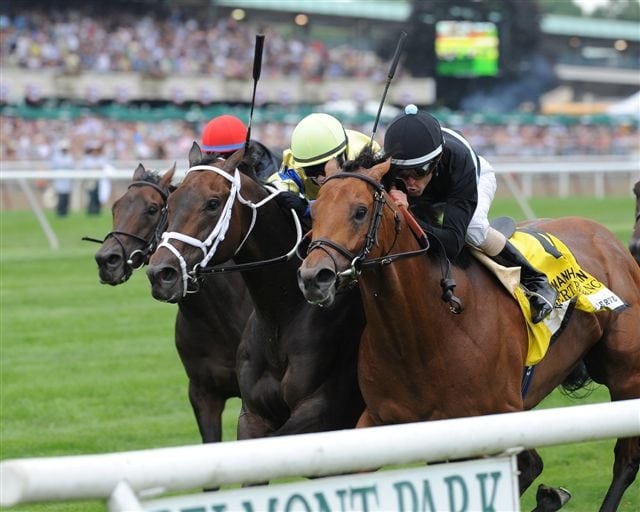 Making his second start in the U.S., Desert Blanc prevailed by a nose in a  deep stretch duel with Papaw Bodie to capture the Woodford Reserve Manhattan (gr. IT) on the June 9 Belmont Stakes card.

In a race lacking any early speed, Hudson Steele took the lead from his outside post under Javier Castellano, with Desert Blanc just behind entering the first turn. Ramon Dominguez and Desert Blanc had settled into fourth while Hudson Steele, closely tracked by Papaw Bodie and Brilliant Speed, continued to lead through the half-mile in a pedestrian :49.42.

The race order was unchanged as the field continued down the backside, and the pace quickened as they rounded the second turn in the 1 ¼-mile test on the firm inner turf course. Coming out of the second turn, Papaw Bodie, with Rose Napravnik aboard, and Desert Blanc were full of run and soon overtook Hudson Steele in upper stretch.

The new leaders battled gamely to the wire, with Desert Blanc getting a nose in front at the finish in final time of 1:59.65.

The British-bred winning son of Desert Style, trained by Chad Brown for Swift Thoroughbreds, Mackie Racing, Vintage Thoroughbreds, and Bradley Thoroughbreds, had been trained in France by Pascal Bary before being brought to the U.S. following his 3-year-old season of 2011.

After winning his first three starts in France, Desert Blanc was eighth and third, respectively, in group III and group II stakes before coming to the U.S. In his North American debut, the colt finished second over yielding turf in the Fort Marcy (gr. IIIT) at Belmont May 5.

The victory improved the record for the 4-year-old son of Desert Style to four wins, a second, and a third from seven starts. He has now earned $428,133.